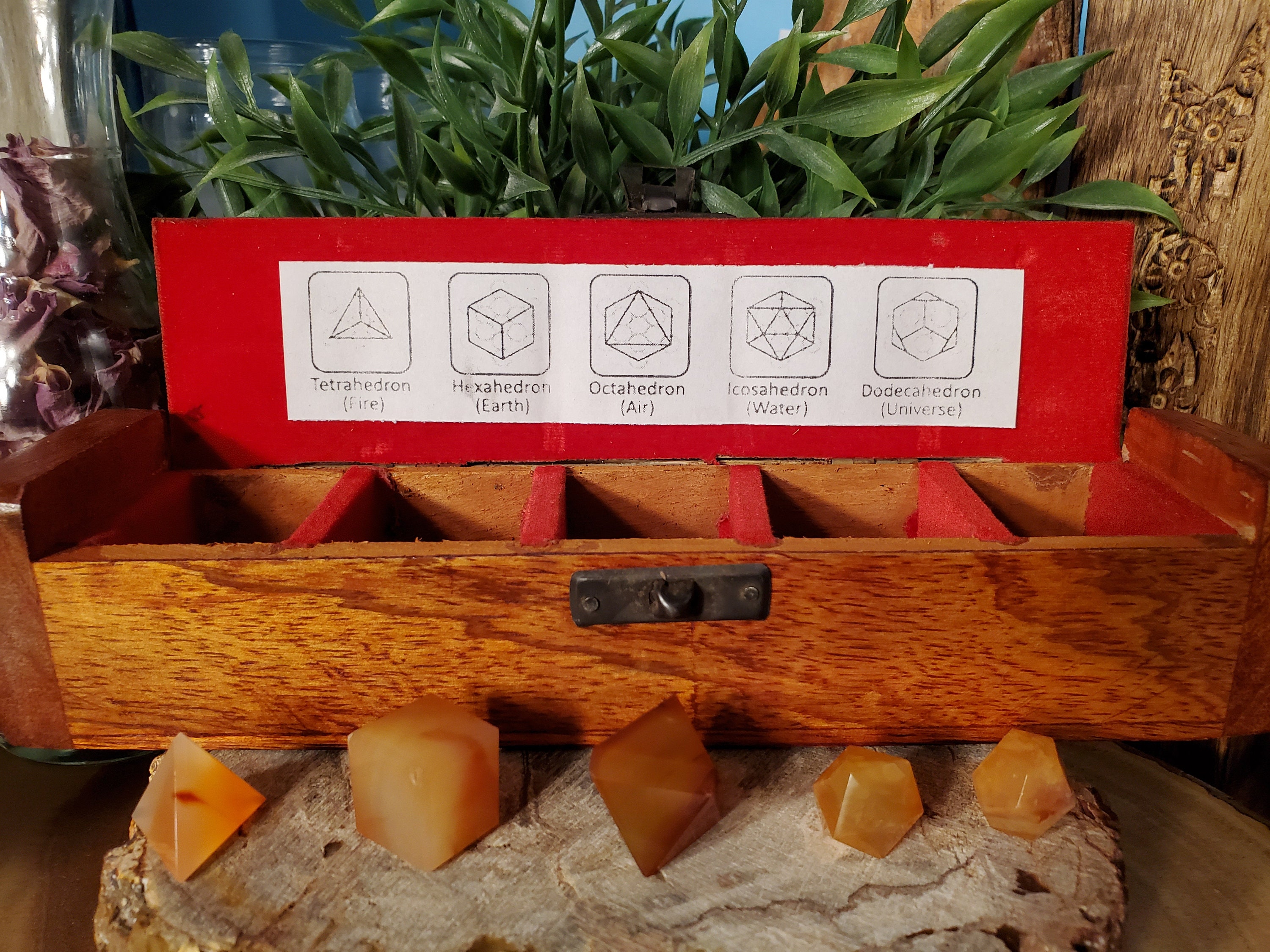 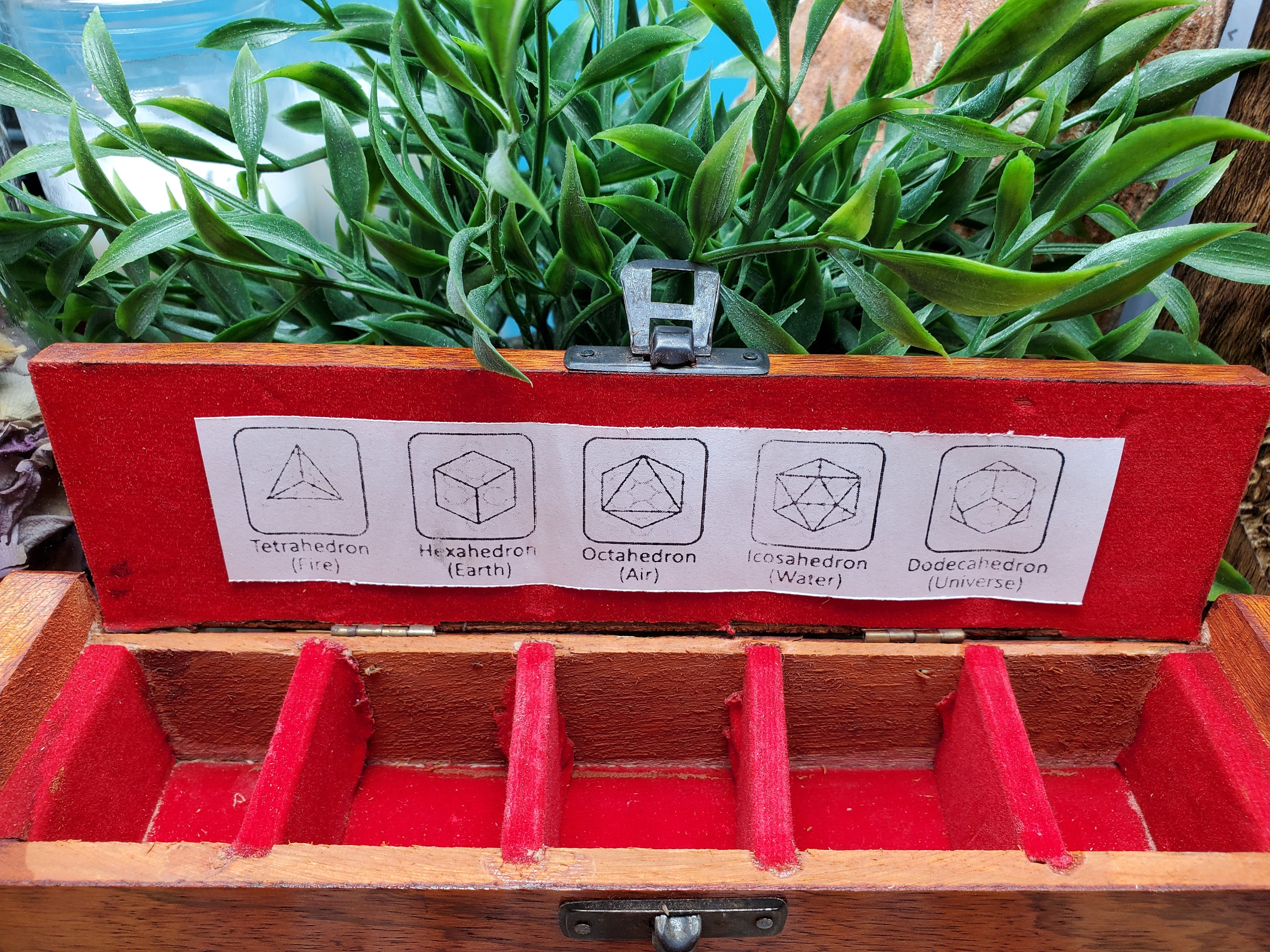 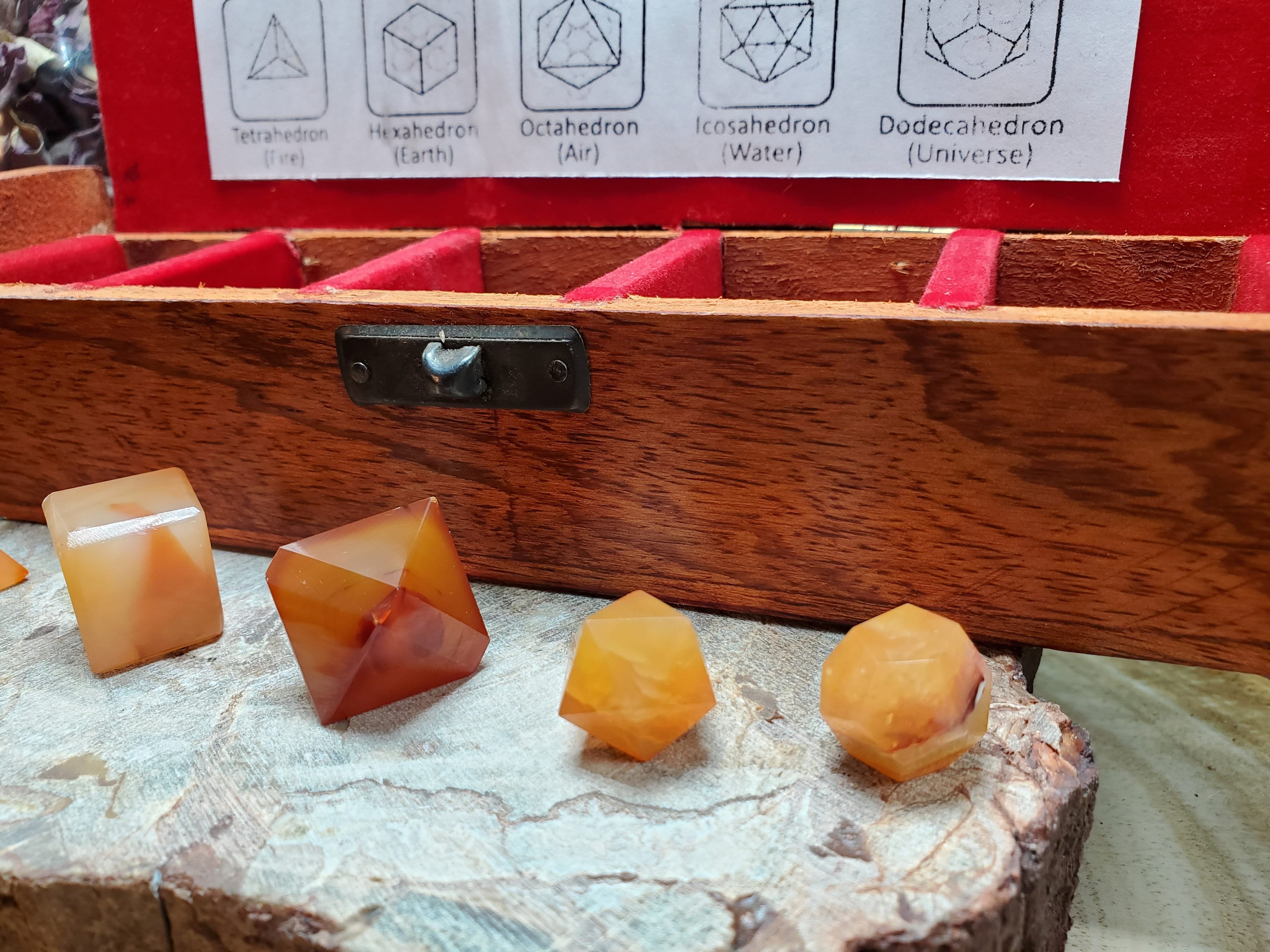 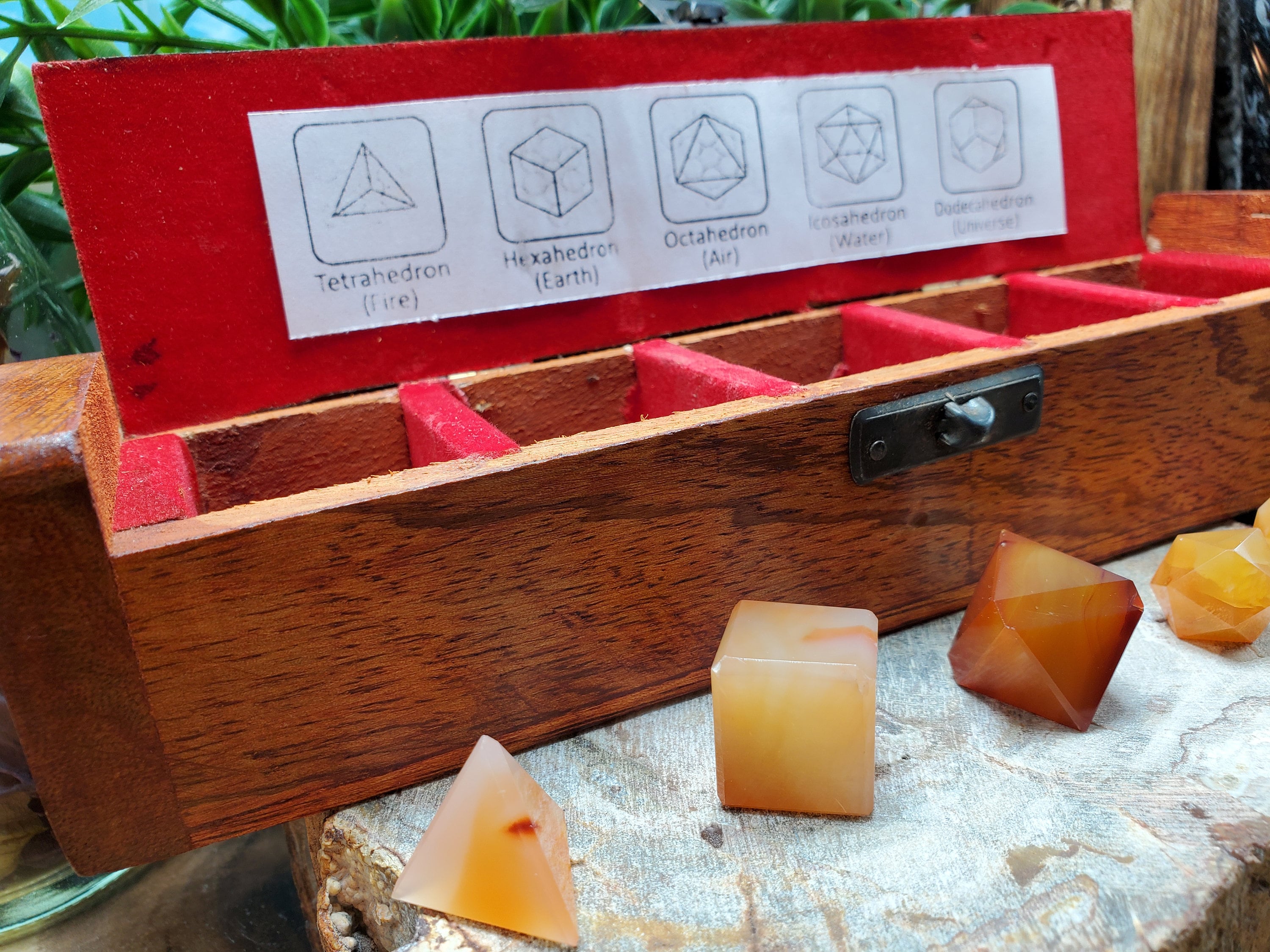 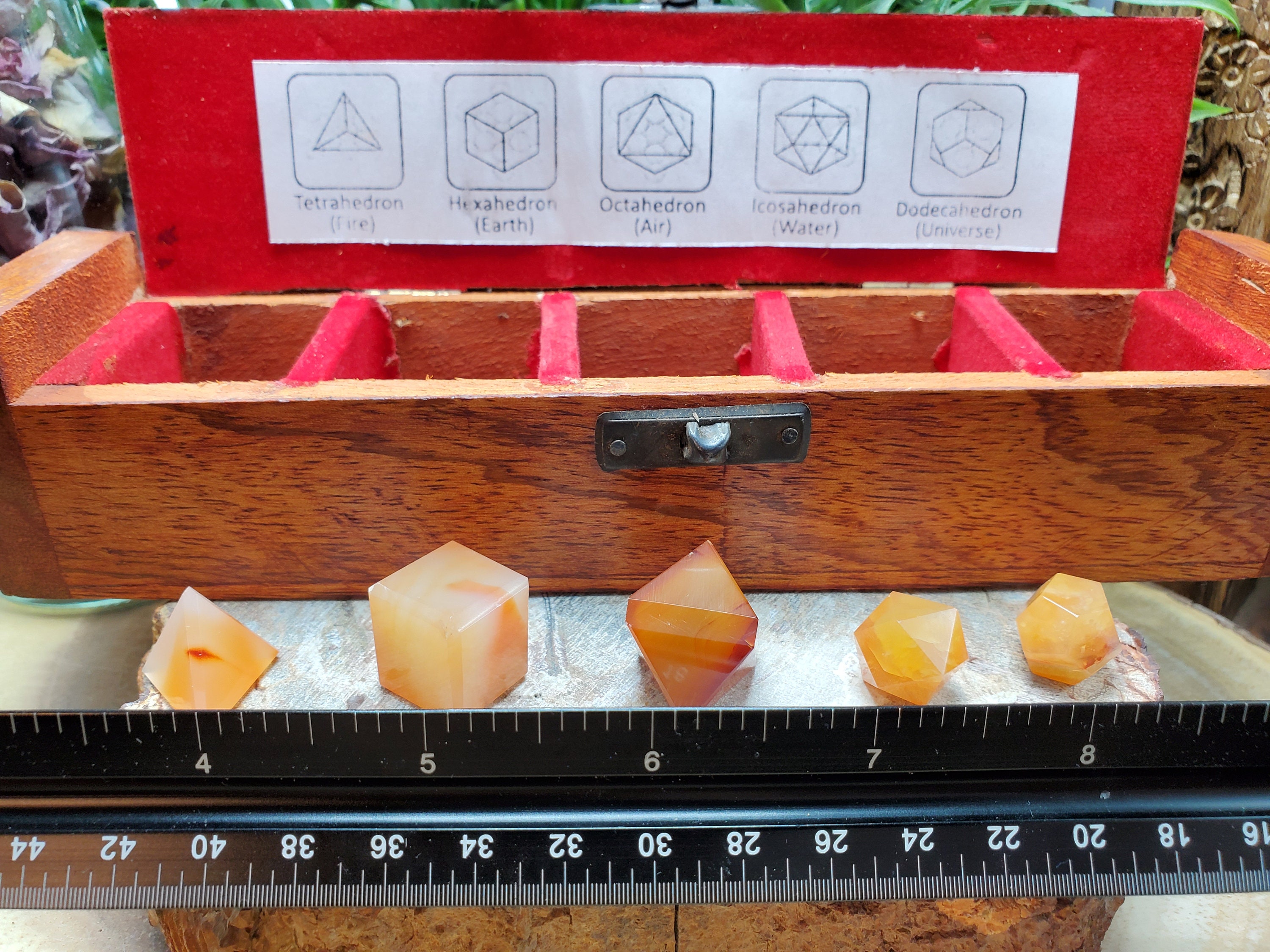 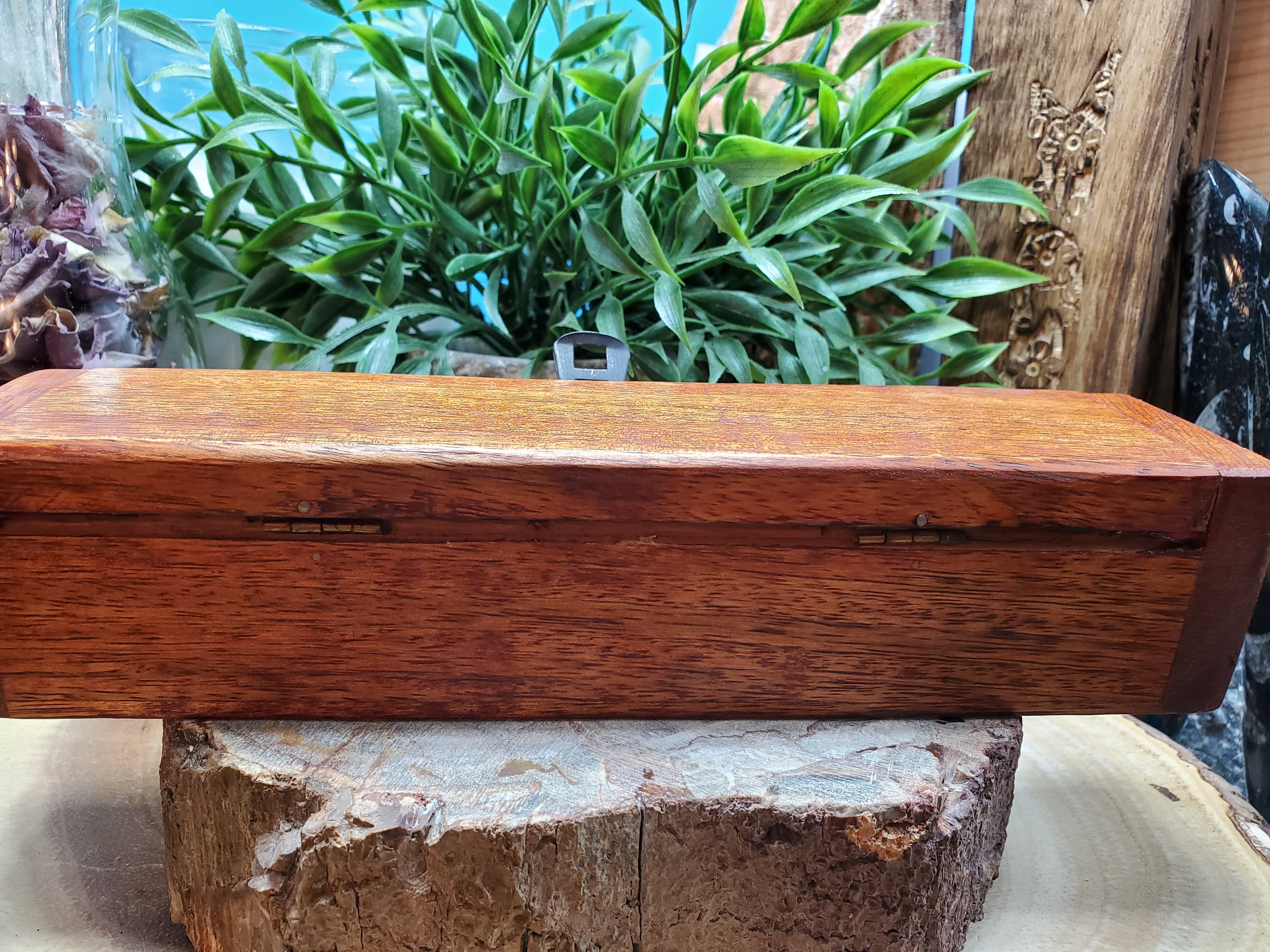 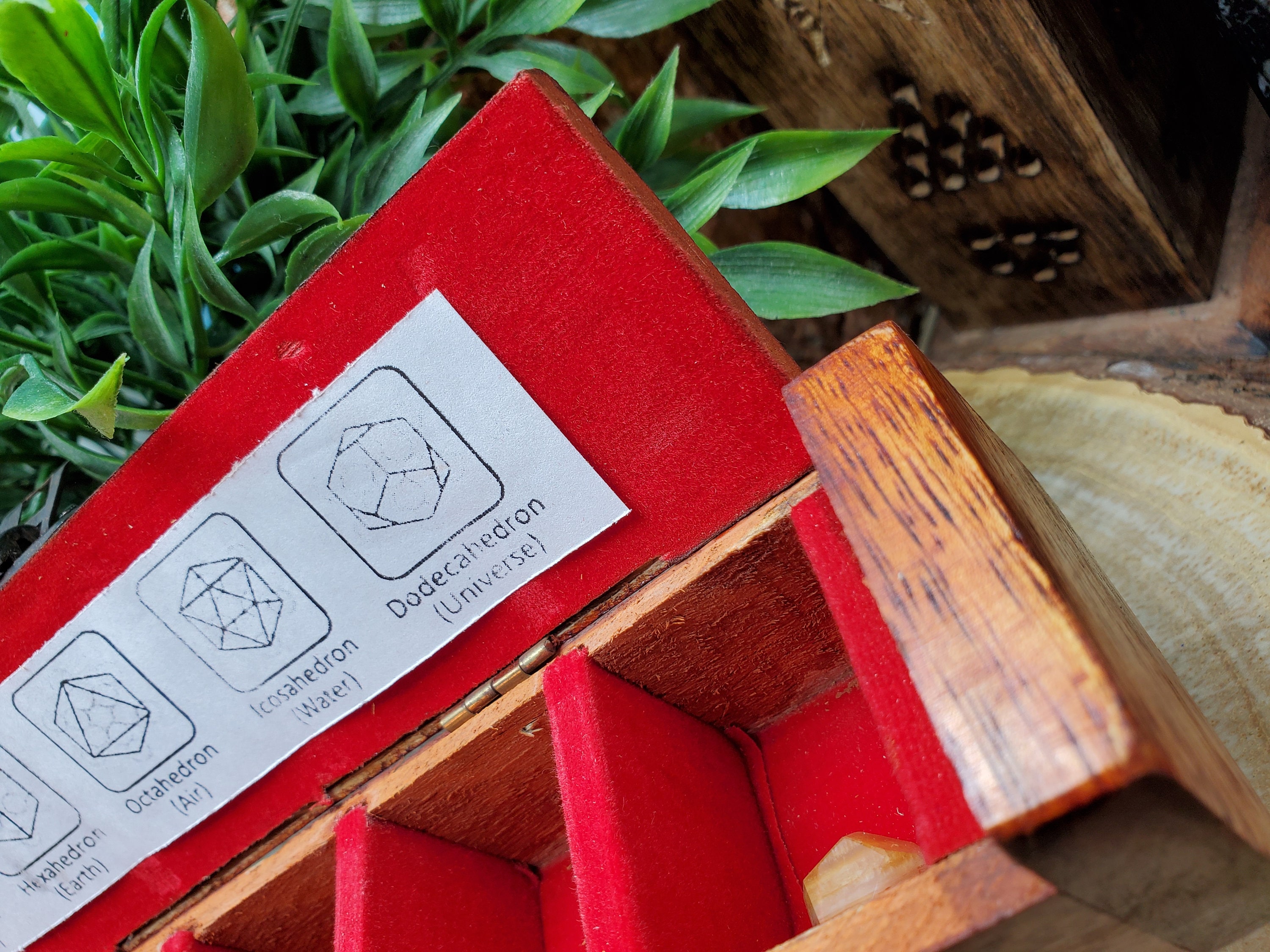 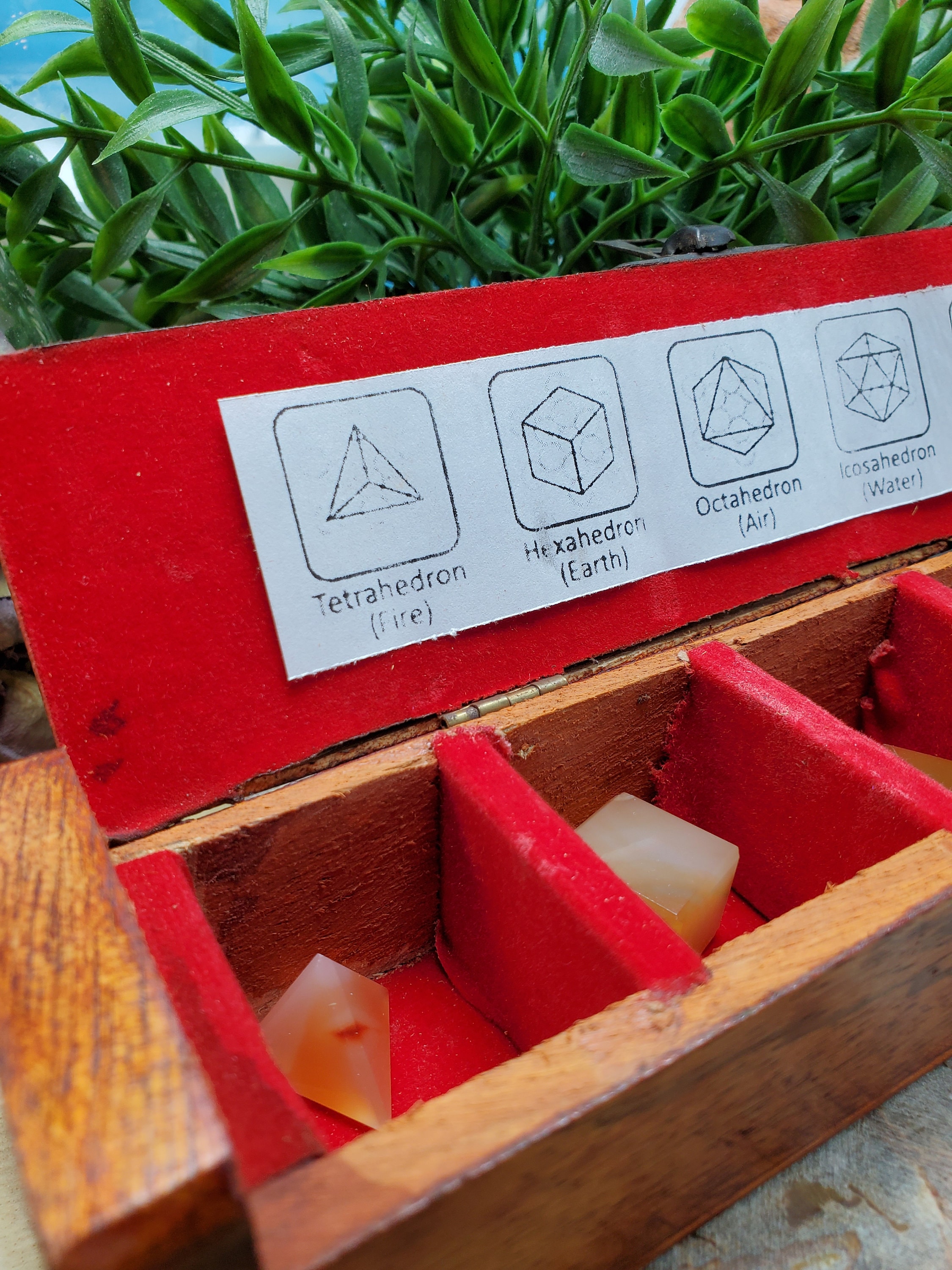 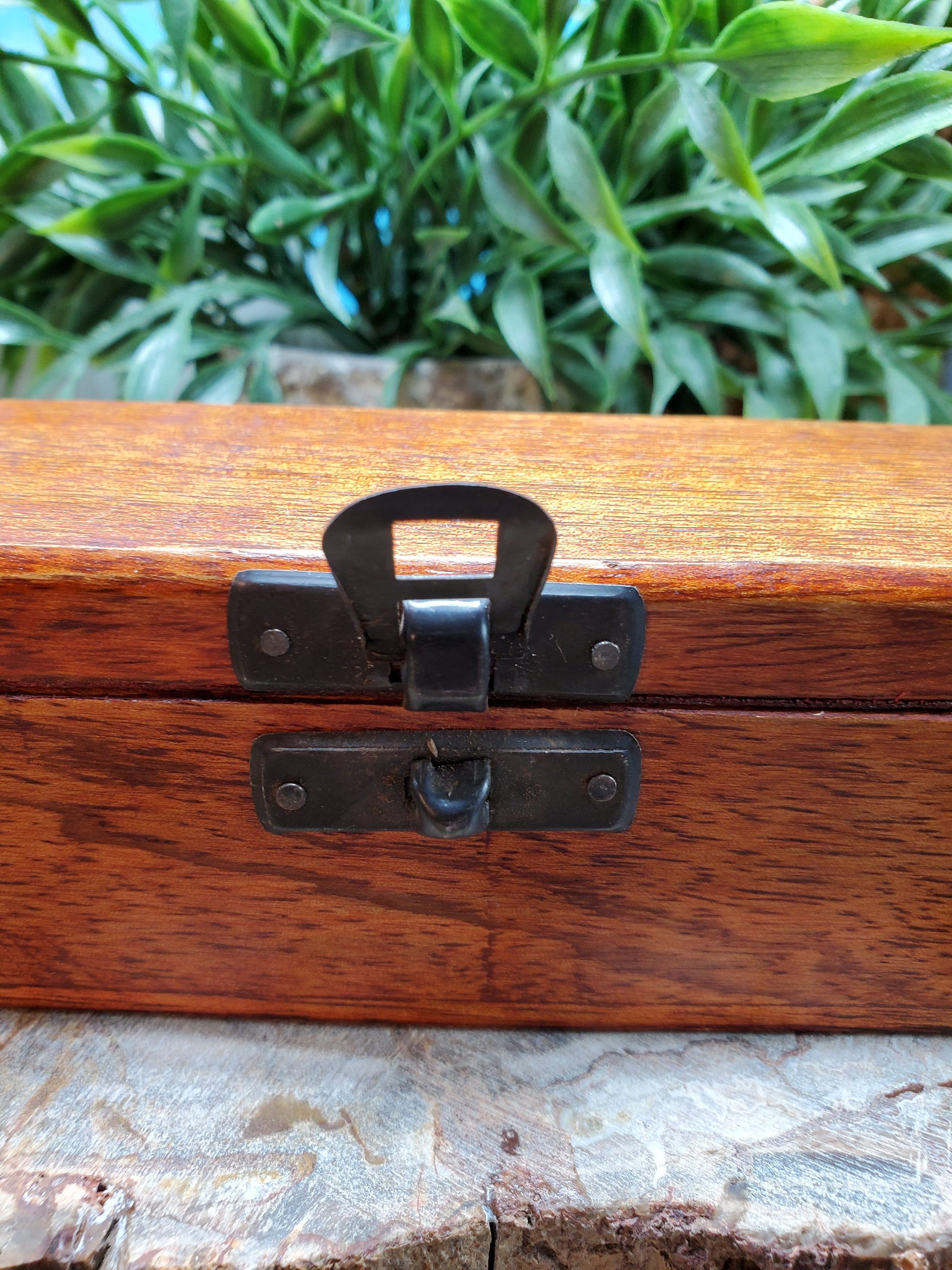 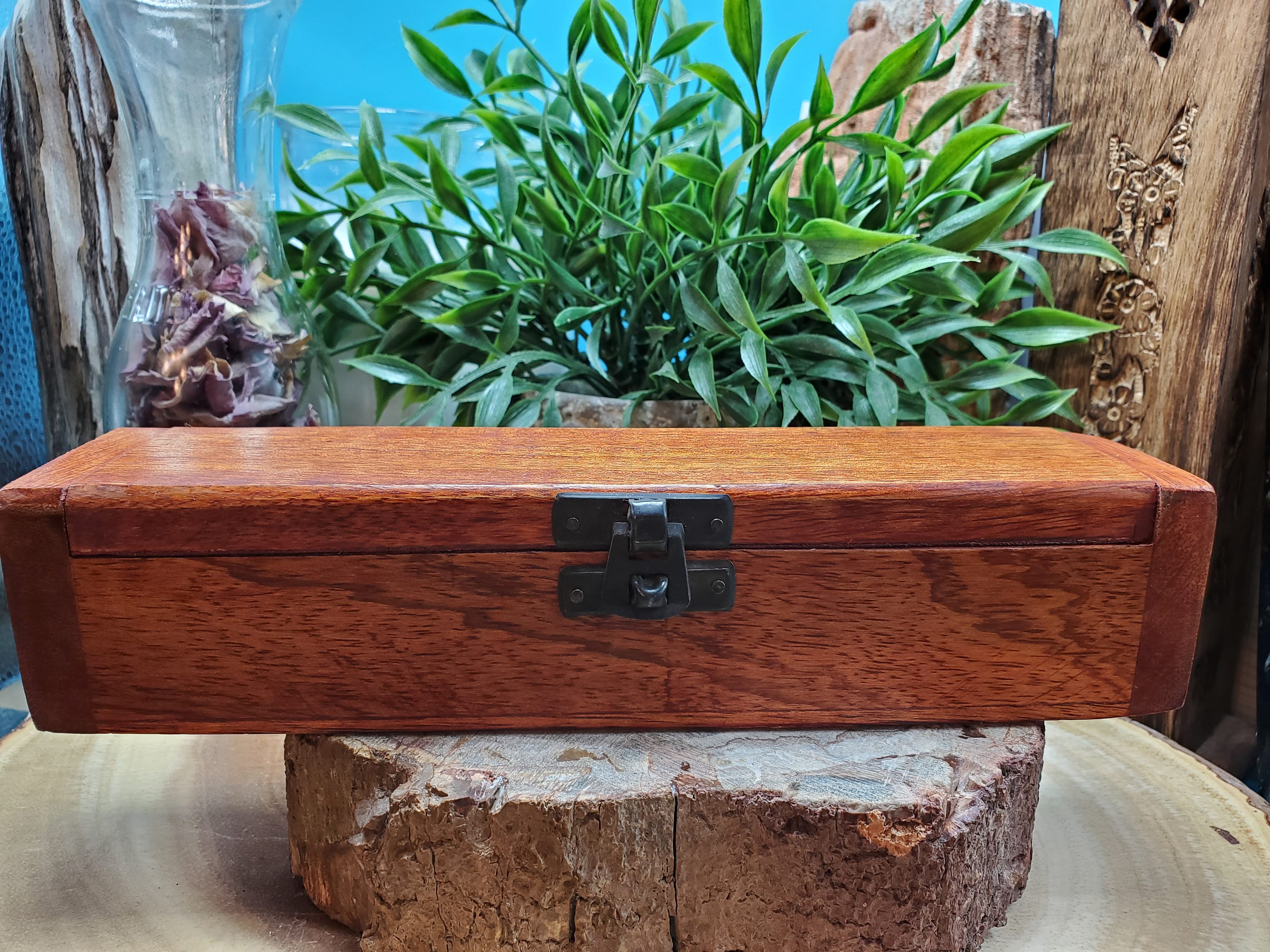 Five Piece Platonic Solids Set. Each set contains a Tetrahedron, Hexahedron, Octahedron, Icosahedron, and a Dodecahedron. The Platonic Solids weigh between 4 to 19 grams and are approx. 20.32 mm in height/length. The wooden case has an antique appearance.

Platonic Solids (Sacred Geometry) consist of every shape that is known in the Universe. They are named after the Greek Philosopher and Mathematician Plato. He included the Platonic Solids in his dialogue Timaeus c. in 360 B.C. In the dialogue, he associated each of the four (4) classical elements (earth, air, water, and fire) with a regular solid. The solids were discovered by the early Pythagoreans around 450 B.C. Every face of every solid is a polygon of the same size. At least three (3) faces of a solid meet at a vertex. The Sacred Geometrical 3D shapes appear in everything throughout all creation from crystals to human DNA.

The Tetrahedron is composed of four (4) triangular faces with three (3) of the faces meeting at each vertex. This solid is attributed to the element Fire. It is associated with the Solar Plexus Chakra.

The Hexahedron is composed of six (6) square faces with three (3) of the faces meeting at each vertex. This solid is attributed to the element Earth. It is associated with the Heart Chakra.

The Octahedron is composed of eight (8) triangular faces with four (4) of the faces meeting at each vertex. This solid is attributed to the element Air. It is associated with the Crown and the Third Eye Chakra.

The Icosahedron is composed of twenty (20) triangular faces. This solid is attributed to the element Water. It is associated with the Sacral Chakra.

The Dodecahedron is composed of twelve (12) pentagonal faces with three (3) of the faces meeting at each vertex. It is associated with the Third Eye Chakra.

Carnelian helps to calm fears about death and rebirth, bringing acceptance of the great cycle of life. Carnelian is a powerful Sacral Chakra Stone. It gives courage and boosts creativity and compassion. Carnelian can enhance vitality and provide higher energy needed when approaching new projects and dreams. It's helpful in meditation by allowing deeper concentration and keeping out interrupting thoughts. Carnelian is useful in making decisions by keeping us focused on the present time (now) and not on past experiences. Carnelian calms anger and grounds you in reality, while keeping you aware of unconditional Love permeating the Universe.
Carnelian relieves PMS and menopausal symptoms as well as assisting in the areas of fertility and potency.
Carnelian is one of the few stones that doesn't need clearing. It can be kept with other stones to keep them cleared as well.

The Wooden Box is made to have an old/antique look.